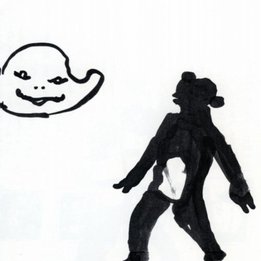 Bass Drum Dream
Drum set in the sky,
Huge crashes and pounding drums fill up the whole place,
The bass drum making the sound-wave with one giant head
It's similar to a secret part of my head
A ghost that's gone, left in its place instead, a love for certain sounds
Bass drum clouds
Lightning shoots out of my eyes to blow fuses,
Not angry but singing my songs
Conducting with cloud hands made of moisture and electric shocks
Most of the sounds that come from my hands are the thunder explosions
When I clap together, waking you up
But that spell's wearing off


Where It's Hotter pts. 1,2 and 3
Summer's come and now you're gone,
You went to where it's hotter
I left Olympia too,
I went north for the water
Swimming every day
I wanted you to be here for that
So I'll come and pick you up
And we'll go swimming on the way

Now you're still where it's hotter
It's true, I left north for water
18 more days, I can't wait to see you

Now 2 months have passed
I picked you up, we're home at last
Up north the water's getting colder
Oh no, I keep thinking about Florida!
It was hot, we stayed in the water
I wanted to keep this thought forever
In my head, we're still in the water


Feedback (Love, Life, Loop)
Something's in my head
When will I ever let it out?
That song is something we all love
It's born when we sing and shout
We all sing songs of feedback
Whenever we're in love
We all have voices for speakers
Feedback just floats in the air,
It's fast and it flies everywhere
The microphone loves the speaker
But they never get to meet,
Singing their songs of feedback
Nothing has ever been so sweet

Then when I wake up, there's something real
Something real and someone who's alive
There's a soft heat growing from my chest,
Then there's this explosion


Moon Moon
I got pulled out by the tide and I found myself inside
A blanket on the dune, a balled up magnetic moon
Waves crashing at my feet, I stood up to breathe in heat
"I called you out to see!"
I saw deeper into me
But where did I drift to?
The current pulled you too,
And we floated fast and through
Where am I?

We floated fast and through, the tide left us on a dune
I got dug up next to you


I Lost My Wind
You will know where to find me if you ever catch your breath,
I will be down here if you need me
Down right underneath where you lay your head
And drift away out the window,
Where I used to meet you when my head was in my chest
And I dreamt and I knew where I should be
But I got lost
I lost my wind
You could hear me gasp
And I had fists and I disappeared
(Southwest dunes)

You will know who's behind you when you feel it on your neck,
It was me watching you from behind a rock
You will get the creeps when I whisper from above
And you’ll look around for me but I left a long time ago
I saw you give birth in pain
And try and think of a name
It was me being pulled out of you for good


I 'm A Pearl Diver
I'm a hard working pearl diver, I spend the night on the shore
I'm a breath holding pearl diver, I live on the ocean floor
I was born in '78 and I grew up on an island
I learned early on, the value of the pearl
I aged and my lungs aged, and my strength, it grew and grew
Until I set off out into the world
I tried beaches and bays that I found along the way
And I made my pay from the pearls I found each day
Sleeping on the sand, scars on my hands,
Here's how I lived my final day:
I woke up early this one morning
'Cause I had a weird feeling about that day
I should have noticed the gray cloudy warning
But I swam myself out into the bay,
Where I dove down deep to feel around
Between the rocks and the mud,
There was a sound that dropped down towards me,
A pearly voice from above!
It said :
"Wait around, make yourself drown
I'll be right down and we'll go to town and forever just float around"
So I waited, and waited, and waited, and waited
And my weight went away, it just went off
Salty water poured into my lungs
And my hard working hands turned to rot


The Moon (7" Version)
I drove up to the city at night and I found the place
Where you grew up and then where you stayed
And we walked around and stayed up late under city lights
I spent the night, next to you in the house where you grew up
Next to you, I miraculously woke up
In your parents' house I laid in bed with you

And we went all the way up to the small town where I'm from
With foggy air, and the wind, and the mountain top
We clung to rocks and we looked off, and you held my hand
You almost got to start feeling me
Finally felt like I was breathing free
Under swaying trees we fell asleep and we had the same dream
The stars were bright, we dreamed the same every night
On my island home I spent some time with you

We found a precious place in the sand right out in the wind
And we laid under a blanket and heard the furious sound
The roar of waves, the pounding surf, two bodies on the earth
It was intense just getting to be there next to you
And you were trying to get me then and I was happy to let you in

And every night when the sun went down in the town where we lived ,
The empty streets were lit by reflected light from the distant sun
Bouncing off a glowing ball of rock, we just laid on the roof
And watched the moon, the moon, the blue light of the moon
We didn't talk and silently we both felt powerful
And, like the moon, my chest was full because we both knew
We're just floating in space over molten rock
And we felt safe and we discovered that our skin is soft
There's nothing left except certain death
And that was comforting that night out under the moon


Lanterns
Don't go out, don't blow out, don't smother me, lantern
Don't reach out Phil, don't extend, don't try to touch nothing
I'm afraid I'll see you out on a date and it’ll send me camping
Don't steal my show, let lantern light not linger nowhere,
Not on your life
Leave alone, don't try to hold nothing
Don't answer the phone,
Leave alone, be a darkened figure
Sink in slow, have your fort glow, have your lit-up lantern


Antlers
Little bird I invite you, build your nest
Little bird, I've got branches above my head
Sway with me aimlessly, walk over mountains high
Find winter nights with me, hang in your hammock high over me
Hand over flight and all fright to me
Cup your hands and become reindeers or maybe a storm
Be placid, be glassy, be born
Go ahead, be the bird in my horns
Come with me


Deeply Buried
Letting you go again,
I'll leave you alone through this pregnancy
Buried deeply, I'll get you out of me again
But the problem with having you out of me,
Is the giant space you left,
Where you grew in me
And grew so powerful
Powerful bad moved to me,
It grows inside of you, buried deeply
Is it too late for me?


Wake Me Up
Wake me up
While I slept, you came in through the window
Morning sun
I heard you whisper my name,
Your voice was the singing of birds
From where I was, you sounded far away
But slowly, I floated towards the sound I was hearing,
The sound of you whispering to me
I let go and opened my eyes
Once I let go, I forgot where I was
I squinted my eyes in the sun
I caught a few glimpses and everything was bright
It was you I was seeing in sunlight


I Listen Close
I unlocked your side
It got dark and we went north,
Trying to peek through driving snow
And I listened to you glow
Outside, the wind got fast and cold,
And made a tiny sound, the ghostly glow
You sang low, I listened close
I tried to join you in the note,
The three parts surprised us both
We three: you, and me, and the glow
It will be grey when we get home
I listen close, you keep me warm


The Glow pt.4 (Version)
And it felt just like being pulled out by the tide
I held onto your side
We swam 'til it got light,
'Cause the blue was deep and wide

In sunlight our bodies glide,
There was water in my eyes
We sank and we arrived
We found ourselves inside the light
The light, the glow


Phil Elvrum's Will
I want wind
I'll trade the traffic for the roaring waves,
I'll travel around to all the beautiful places
Or if I die in this van and someone finds this page,
Let my voice blow out in a salty spray
Let my friends blow salty tears at the sound of my name,
In either case, take me out of my case
Let my eyes reflect distance, Let me live long days
Or if I die in a car, or if I drown in a plane,
Let my grieving friends feel freed and brave
And go all the time to the beach to picture my face
I want wind


There's No Invincible Disguise That Lasts All Day
What?
So I can sing a love so poetic
And I can claim a voice, prophetic
And then for making, somehow I’ll be exempt?
No

What?
So I can see a glow, a glimmer
And feast on fruits of all the singers
But not be stung somehow by yearning's stinger
So supposedly, I'm strong and I cultivate a luscious lawn
But my crops can fail, I can also be wrong
I can woo a distant beauty but hopeless missing always rules me
There's no invincible disguise that lasts all day
Painful storms will always come to blur my way
Conversely, blurry storms will go their way
There's no invincible disguise that lasts all day
The act is sweet but it casts a shadow, just the same