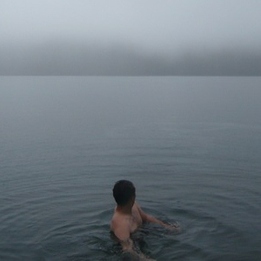 
Compressor, 1997
These microphones hear tons of sounds
And they can figure all of them out
Nine or ten plastic microphones

But there's one thing i never use called a compressor
When I first found it, I couldn't figure it out
Now I understand
Here's what they do, I think that I know:

They keep their eye on you

Eight Months in Olympia
Olympia Talent Show Compilation, 2001?
I walk around on the sidewalk surface
I just moved here from my home in Anacortes, three hours north
Lots of people moved here too from home, just like me
I’d like to know you all like you know each other
And I hope that you will know me
‘Cause everyone knows that everyone here does everything they want
I’d like to be just like that, doing just what I want
I’ve got some good ideas, too
It’s hard to come, buddy, where you don’t know anyone
I’m shy but I’d like to know you

Eggs in a Basket, 2003 (live)
I ran down the rooty path
Fast, with all my eggs in a basket
And they flew out all over the roots that grew out
And sent my bounty bombing through the trees
My eggs got broken when I tripped on the trail
So I kept my eggs unlaid, I laid back in mossy glades
And never ran or glid down hollows’ paths, nor paved
With my basket thrown away and my hands freed up,
I gave no one nothing I didn’t have in the first place

If you think the black bird above you will disappear into the night,
Then sit and wait
Black night will come
Find yourself invisible and then try to tell me again:
"I Belong in the world"

If you think going camping will undo a long life of slow dying,
Then go ahead and go camping
Try to forget in the desert, try to forget on the hill
Try to forget and then tell me again:
"I belong in the world"

If you think the howling wolves that live outside the city gate
Will keep you from tasting the permanent snow
That forever awaits on the distant peak,
And you hold yourself hostage,
And your own dog will bite you
And the wolves lick your wounds
And the wolves will raise you to the summit
And you'll live, and taste, and say:
"Let's get out of the world!
Let's get out of the romance!"


Wolf Mountain Howls / "Into the World" / Do Not Be Afraid
P.W. Elverum & Sun, 2004
Do not be afraid
You will spend time in the mountains
"In the mountains" means "In the world"
In the world it is dark
And the real world is looming,
It is dark upon darkness
You feel around slowly,
Some sounds in the night,
And you will be "in the world"
By not being afraid and being able to g,
Make yourself be "in the world"
Get into "the world" by letting things touch
By noticing mountains
And the snow from them to you
The youth we are losing does have some meaning,
Like ripening dawn,
Because as we are dying, so dies our days
And entering evenings, long night comes
And entering evenings, we become grey in the blue light
And slow and thoughtfully enter what waits in shadows
The black mountain looming above
Do not be afraid of "going into the world"
We go home
Going in, we go home,
Into sex and disasters and living unknown
You will be “in the world” by letting things touch
You will spend time in the mountains
You will spend time in the world


Dark Foundation, 2004 (live)
If you lean into the shadows
And fall asleep with your head to the east
With your feet to the west of the light, as it is dying
The coming day will pat your head
While your feet are still behind curtains
And you will wake up like this,
With a dark foundation
If you go slow enough
And go through the day with shadowy legs
You will know that this is how the world is
You’ll be standing on its dark foundation


Marriage, 2004 (live)
Like their two solitudes in watch
One over the other
It’s like the two edges of the grand canyon
Standing watch over the yawning gulf
A marriage in the night makes two babies in the morning
With no parents


The Whipping Wind, 2004 (live)
The whipping wind that’s going to blow will soon take over
And you will be whipped at first but then you will be inflated by it
And you will rise and then from those heights,
You’ll see that nothing lasts as you descend to the summit,
Where you will live among the howling wolves
The wild nights, the feast of life and hard renunciation
And like more food will grow in fields of rotting bodies
In the winter your body grows a thicker coat of fur
So you can throw all your things away and go play in the snow
Without having to wear wolves
If you let weather win you, if you let neighbors fall away
If your eyes reflect distance, if you learn to live long days
If your will will not surrender
The world will go it’s way with you in it


There’s No Shadow, 2004 (live)
There’s no shadow that the fear will wait for you in
‘Cause when it comes, it comes cloaked in light
There’s no shadow your dark eyes belong to
In the dark night on the unlit trail with no moon,
You are full


Knowing, 2005 (live)
Although it seems like the war is just starting
We live in an aftermath, too
So we can enjoy certain things
Like, for example, already knowing


The Books Are Cold, 2005 (live)
The books are cold when you’re gone
And there’s no one to touch the page with
But I admit they look good
Cold and good looking
Illustrations, and poems, and all the treasures of human life
From everywhere and all time on cold paper
But when you come back to our house,
There will be books in the bed
But for no reason
The real thing will always be better than the book about it
And my song will never be as good as silence


The Real Work, 2005 (live)
Disappointment, and noise, and all the struggles of human life
Sprawled out across all valleys, like crowded farming
And when I look into the world, I feel like warning
But when I look into your eyes, I just say nothing
This is how I decide to stand for “surrender”
And this is why, to me, “surrender” means just doing real work


Meaning of Life, 2005 (live)
I came from brilliance
I return to brilliance
What is this?


Unhealthy, 2005 (live)
I sing about not smoking, and eating well, and nourishing the body
Because we are the people who must start working to make the world better
And how can we do it unhealthy?

Not Too Fancy
Play/Rec, 2006
A picture of me in my own room
I guess I try to see a piece of truth
I guess we are not too fancy

I guess we aren't too fancy


Distorted Cymbals
K Records, 2012
Lying on the ground with your wind knocked out
The sky is vast and growing
And there is no sound and no music
But distorted cymbals rise
The sky’s yawning size roars
The sky is all distorted and blinding

Lying on the ground, looking through a mouth yawning
Yawning and roaring, gasping and clutching
Who could stay like this, falling under a tearing-off ceiling
But white light is still swelling, consuming, concealing
The feeling of distortion, the waves through the trees
Watching a wall get vast
Distorted cymbals rise in silence, amplified
Lying on the ground, looking up,
Overwhelmed by sky


To The Ground, 2012
Atelier Ciseaux Records, 2012
It was all a dream
I came out from beneath Earth blanket
In the form of a person
Awoken, blown through a life in confusion
Back and forth in the whirlwind
And the wind has a song
33 years of watching a mountain
In between 33 waves of weather
And the stone is watching me back
I return, at last, to the ground


World Heaves, 2012
Graveface
I look to the north in the end of light
Late November, squinting eyes
Islands in the dusk, a hidden life
Watching waves while years go by
Getting old and blurring
What is “person?”
What’s “planet” and what’s “sky?”

And the sound of the air rushing out of a vast throat
Roars uncertainty into the sky
Singing in the dark, remembered mind
In the void, a thing grows and collapses, wide
Form after form, born at night
The world of water heaves and sighs


Cooking pt. 2, 2020
The Song is Coming From Inside the House Benefit Compilation
Maybe it's not fair to expect so much from you,
Young people of the modern mega-state
The adults have always brought you food
Now they've stopped showing up and you find yourself thrusted out into the night alone

When you walk into the night alone,
Hunting and gathering and sleeping in caves,
Will you cook faithful to the recipe
Or will you open your nose and go out in the rain and find food for the first time?

If you're hungry beneath the full moon,
In the dark belly of the modern mega-state,
Find what you have left to give up
If your friends convince you you should get a tattoo it should say "generosity"
So you can remember the feast will end soon
Your parents will redo your old bedroom
Unburdened by inheritance,
You can walk out upright and go into the night of this new born present moment
And make eye contact with others