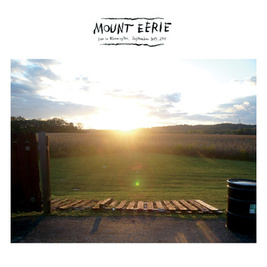 P.W. Elverum & Sun
Introduction
House Shape
Between Two Mysteries
Ancient Questions
Karl Blau
No Inside, No Out
The Place I Live
Lone Bell
See Me
Stone’s Ode
The Place Lives


House Shape
I stayed inside all morning,
Watching waves of rain pass over cold and dry by the window
I didn’t turn a light on
The fireplace dead since last night
Emptiness inside, cold morning
Low grey sky immense
Living belly of a silver fur thing

In waves of weather, the house lies
Piled up wood with me inside
I’m piled up dust, alive, dreaming
Or walking whirlpool of water
Awake and indifferent
Looking at cars go by and then get forgotten
Only a sound of a waterfall, breathing out in one long exhale
Rings in my ears for a moment, then another wave of rain blows over,
Greying out the light
The lawn through window seems undiscovered

Lost in an unfolding
Thinking about what to do with a day
Sitting while the light dies, until finally it’s over

In blue dusk, I finally step outside,
Breathing in the cloud that has settled,
Noticing a black looming house shape
And at last my eyes crack open


Between Two Mysteries
I've seen summits buried in more air, buried in space
And I just lie down in the snow, buried in space
I've seen moss covered stumps in the dying light, taking on shapes
Black wooden mythologies
I know a place
Layer after layer of comprehension
Welling up in the morning light,
Between two mysteries

The town rests in the valley between Twin Peaks, buried in space
What goes on up there in the night, in that dark, blurry place?
Driving to work in the morning, we live in graves
Always trying to climb out of the hole
Buried in space

And the songs fade,
And the singers die
But my heart will not stop thumping
The shapes in the dark still look convincing
So here I am


Ancient Questions
Was it a dream where I wandered off the trail, aimlessly drawn?
And came to a clearing on the hill above town, still hearing cars
And a circle of stones surrounded a pool of black water and sky,
Where I reached in and pulled out a song, ceremonious and young
I think I dreamt it, standing on the street in the wind, looking south
Hunting for singing, indulging imagining words in the wind
But nothing means nothing
Everything is fleeting
Don't get used to it
I say, “Look upon the ruins”
To distant branches on the hill, there's no song, no sacredness now
What I’d called the spirit world blows into dust,
Like me and the song born of alienation

Ancient questions unanswered, alive in me again
Indulging, imagining words in the wind:
“But nothing means nothing
Everything is fleeting
Don't get used to it”
I say, “Look upon the ruins”

Voice in the branches
Pulls me still

Karl Blau
Blue Moon
Waded out past the wave-swells,
Where we all floated hopeless
And he told us to stop treading water
He sang about the sand
Where we could all touch our feet down
He held out his hand with his head tipped back, he sang aloud
But we didn't listen, he swam off alone
Long live his words, all caught up on his own
He said:
"Someday the moon will reach out to the sun
But for now, it must drift alone"
But for now, he drifts alone

No Inside, No Out
Because the pupil of my eye is a hole,
There's no inside and there's no out
The world is in me and I am in the world


The Place I Live
If I look or if I don’t look,
Clouds are always passing over the place I live
The place I live is passing under my feet
While my mind wanders in a sea of fog

On a ridge, seeing through a hole in the fog,
I say to myself
“Behold”
But I see nothing
Rocks, and water, and wood
Not speaking to me
Slow, and uneasy, and alive

I mean the place lives
And clouds pass over
The landscape a blanket on stone
Land waves are rolling
Momentarily, I come out from under


Lone Bell
I imagined a clear bell echoing in the hills,
Behind curtains of rain, in the hills behind the high school
So I opened the door and went there
Walking slowly in a white wall of fog,
A silent, more cautious awareness arises
Deeper in, the ground at my feet falls away
On a peak or in a swamp,
All debris erased

What is left of the dissipating dream world I made?
Midday, in the light, quiet echoes of a freezing moon
A distant bell, cold and clear

See Me
I was a log in the waves last time you saw me
End over end, I was thrown
I endlessly groaned, "Hold my hand, won't somebody come surf me?"
And of course no one came
You stood and watched the wash of water
Wedge me hopelessly into the sea wall
And there I stayed and quickly decayed,
And we all swapped molecules

Now with the wave of my hand, I command you to see me
I'm more like a mountain this time, unmoving alpine decked in fog,
I'm concealed in snow clouds
You're the farmer below
If you've seen my face once then through twelve cloudy months,
You will know that I’m there, behind curtains
You'll know mountain light
Through thickness of night
See me


Stone’s Ode
When I see rivers tearing hills,
Finished with mountains
With the hill at my back
I watch silt sink

The stone groans an ode to wind and dust clouding
In air, the song revealing

A standing wave in the stream,
Bodies assembled of dust
Propped temporarily
In the river, the rocks groan
All water pouring through me
Born in my mouth
Trees bend in my sighing and lie down

Night falls
Cloaks the world in impenetrable darkness
A chill rises from the soil,
Erodes the world of dreams
In ashes and fog
Suddenly life has new meaning
A life
Propped on bones
Overwhelming feeling
Confused, watching dust dancing
In the blow
The stones erode
The river revealing
Awake
Revealed and fleeting

Looking east in the spring, through ashes and fog
White, permanent snow shines