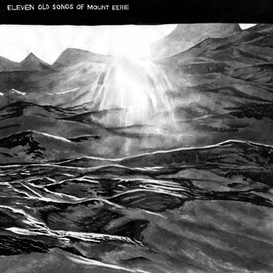 P.W. Elverum & Sun
Cold Mountain
I Say "No"
The Boom
The Dead Of Night
Wooly Mammoth's Mighty Absence
Great Ghosts
Log In The Waves
I Love (It) So Much!
Goodbye Hope
Who?
See Me

Cold Mountain
Open handed, I tried to live among all people with ideas aloft
Open handed, I read the books, I learned the histories, I sang long songs
Until mountains bellowed that my friends are flawed
And don’t forget sorrow and all the other gods,
Your mouth is dirty, your ears were clogged,
and don’t forget, you’re flawed, also
And then it stopped

Open handedness had me in its grasp,
I was running around frantically, anxiously trying to show off my open hands
Tell hope, “Unhand me," I finally yelped
"Let me dwell on bad news, let me wallow in it"
So came long nights and hunkering down
And there stood Cold Mountain with its bellowing sound

When I reached the summit, I made no camp
But I found the cave and the stone pillow
Then I left


I Say "No"
Some people say, "Arise! Arise! Arise! Live friend live!"
I say die
I say shade yourself
I say shine what precious light you have into caves,
And when it dies out, stay in caves
I say find life where you foolishly saw graves

Some people say "Try and try and try, fight and save yourself!"
I say give
I say send them off
I say shed whatever husk if you are ripe,
And if you're not, be fragrant then
I say give
No matter how it hurts, give in


The Boom (Wind)
I used to live among some people
Who sang out with booming feelings and open hands
And throwing my body across the grass,
I listened in with booming feelings,
I became a fan
I made my own thunderclap,
I clapped my hands together
And made a booming sound
That echoed out and got me fans
I found a voice and coughed out songs
In this way I made people think I was of the land
I sang songs and I wrote books of songs,
I grew my hair and I walked like an important man


The Dead of Night
I woke up in the dead of night
Oh, I die
No light, no shape, no sound but I
I was wide-eyed but saw nothing
Kneeling down, feeling around
I felt the fur of something
In total dark I felt the sleeping thing up
From tail to claws, and neck to fangs
It was the black wolf they call “Nothing”
And by its side, I curled and lied
And oh I died then, to sleeping long and soundlessly

When I woke there was nothing beside me, of course
And the world was lit and growing
But I said "I know you're there, I feel your stare
And I feel your breathing blowing,
I see your gnashing teeth and falling leaves,
Your beady eyes in apples growing
Oh dead of night, hidden from sight
I know you are no dream
And I'm not dozing


Wooly Mammoth's Mighty Absence
Quickly forgetting was the way I used to live my life
If you would try telling me your name, I would forget
If you tried telling me “don't worry," I would forget
Because everything I knew would quickly wither be replaced
And all echoes would be buried in the sound of living,
The sound of my feet on the sidewalk
Treasure hunting, I would bury what I found
I was a gold digger, underground

But quickly forgotten was this forgetful way of life
Once I left home, Once I lived as if I had died
Sitting on a rock and doing nothing
Alone for so long, in the dark, I found my sight
And there your name was, written large in letters bright
And there my faith was
"Worry not" declared the night in the great void,
I could feel my shape, what was missing
Like the way the woolly mammoth stands so tall and bold in our minds
I was shaken at the size of my cry
And the true love it described

I know day is dawning, so ends my holy night
It's back to the world I go, back to the girls and shows,
And will I carry myself slowly through the worldly woes, through unfurling foes?
Do I remember?
I sit on a dark rock doing nothing still, just crowded in
And there's the love in flesh and bones


Great Ghosts
I had my hopes of how I would be after living in exile
After closing all eyes to me
I romanced scenes where I reemerged boldly
And bearded, alive, with eskimo eyes
With a new baby on my back, but from where?
And I did not count the fact that I have ghosts in my mind
Stowaways, great ghosts of my life
Great ghosts of old wives
And they're howling

So I spent my wilderness time pulling my hair,
Rolling on the ground and wrestling them off
Yelling at no one, punching snow
I gathered ghosts and I gave them my lecture
I bid them away, pleaded and cried
I said, “There's no room in my life for you, or you,
Or your howling
Let me undo these ropes and go on living without you
And not just change where we live
Go on get”

I had my hopes about how I would be after sending them off,
After getting set free
There's no such thing as life without their prowling
So as you can see, having descended the hill,
I still look like me, I still wallow like Phil
And forever will

And I am teeming with ghosts and I'm still whining for wives,
I’m knitting my brow
But now I've surrendered,
If you listen, you can hear us all howling


Log in the Waves
Broken hearted and sad, I walk upright:
A dumb ape in a world of dumb apes,
A log in the waves

Knowing sorrow is always beside, I walk upright
"O, crown of light!" I sometimes say,
"I know you're grand, but I must not forget my wife,
So I hold her hand"

And with the wide eyes sorrow brings, we see it all
A log in the waves, effortless through oceans squalls
And we know storms are relentless
So?
So are we
We will not leave
Sadness, my wife, and I are honest with each other
And in mornings, I reach my hand under the quilt,
Where she hides
I reach down and tickle her feet
And at my touch, she cracks a smile


Goodbye Hope
Hello my air, goodbye hope
And goodbye, also, to your ambushes
I say "goodbye ghost"
And I watch it turn into wide air,
Where I shine and float

Hello my heart and, yes, goodbye hope
Because you know that we will go steady
Say "Goodbye" and "No"
And find me fanning out my warm unfolding hands
Blindly let me go

Oh, what do I want with my home now that I'm gone?
I want the shades drawn and the overgrown lawn
I would gladly abandon a limb in the trap's jaw,
Just as long as I crawl on with no trapper to call on
Thorough and true, by stem and root, I know no one now
Now I say "Who?"


See Me
I was a log in the waves last time you saw me
End over end, I was thrown
I endlessly groaned, "Hold my hand, won't somebody come surf me?"
And of course no one came
You stood and watched the wash of water
Wedge me hopelessly into the sea wall
And there I stayed and quickly decayed,
And we all swapped molecules

Now with the wave of my hand, I command you to see me
I'm more like a mountain this time, unmoving alpine decked in fog,
I'm concealed in snow clouds
You're the farmer below
If you've seen my face once then through twelve cloudy months,
You will know that I’m there, behind curtains
You'll know mountain light
Through thickness of night
See me